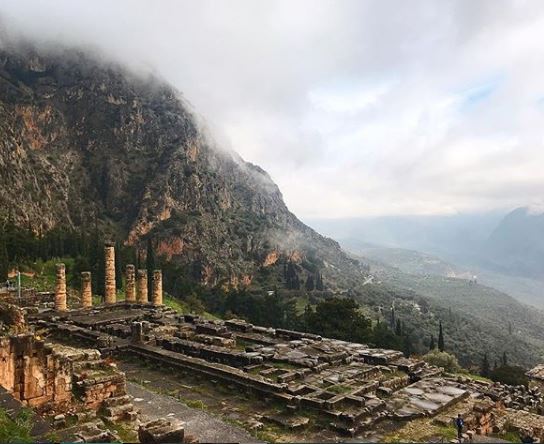 Delphi: The Greeks believed Delphi was the center of the world. This city is famous for its ancient sanctuary , the oracle called Pythia was used to make many important decision in ancient times.
Delphi is also a UNESCO world heritage site. It is located on the slopes of Mount Parnassus, overlooking the coastal plane. Delphi is known for it great natural beauty. It is an active archaeological site with a small local town nearby. The oracle was a major worship site for the god Apollo. It is said that there is an eternal flame that burns. Every four years athletes would travel for one of the four Panhellenic games. Here you can find many structures including, the temple of Apollo, the Amphictyonic Council, the Athenian treasury, the ancient theater an many more. There is also an archaeological museum with many artifacts.

How to get to Delphi: We recommend you use a paid guided tour. In case you want to go on your own, you will need to take the public bus KTEL. There are two main stations so make sure you get to the correct one. The bus station is terminal B, located 260 Liosion street. The station is not located right on the street but on a narrow street called Giousiou. The best way to get there is by Taxi as there is no Metro stop in that area. If you are planning a day trip we recommend the 7.30 am bus because of the long traveling time, there is a bus leaving at 10.30 am, in summer it possible to use this bus and return in a day
The bus trip is around 2,5 to 3 hours. So an early start is recommended